Behind the scenes at my Adopted Soldier 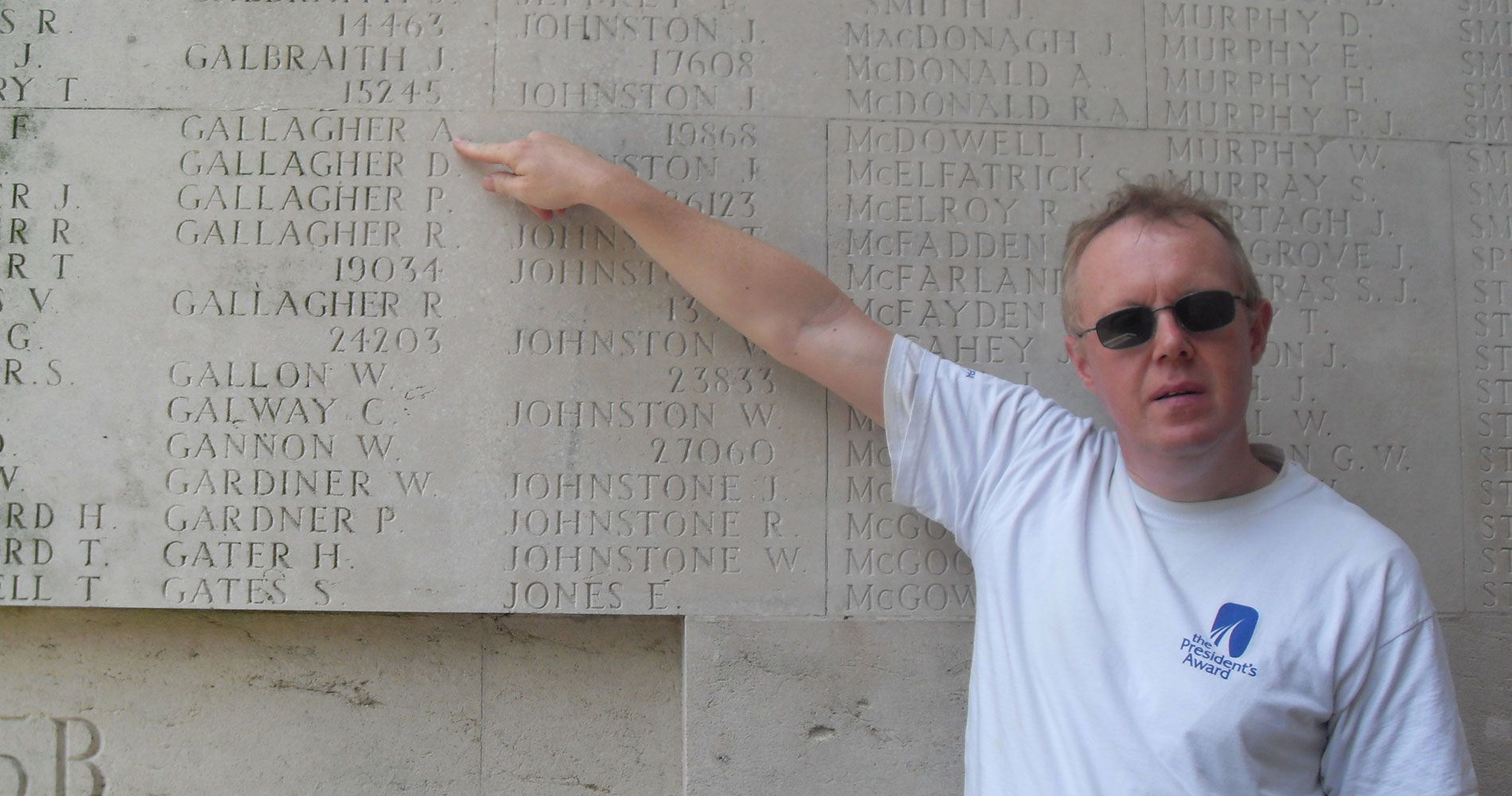 My name is Gerry Moore and I have been teaching History since 1988. I am also the Director of this unique project called “my Adopted Soldier” which commemorates soldiers from the island of Ireland who died in World War One.

My own interest in World War One really began when I was a student in secondary school. I was fascinated by the life of soldiers on the western front and I developed a particular interest in the Battle of the Somme. One day I was given a book to read called “All Quiet on the Western Front” and it made a lasting impression on me. Since then I have read many books relating to World War One and they have all deepened my knowledge of this crucial period in history.

In the early 1990’s I was given an old crumpled photograph of a grand-uncle of mine who died in World War One. Nobody seemed to know very much about him so I began doing some research. I contacted the Commonwealth War Graves Commission and they sent me what information was available. My grand-uncle Anthony Gallagher who was born in a small three roomed thatched cottage in west Donegal was a soldier in the First Battalion of the Enniskillen Fusiliers at the start of the war. He was sent to fight in the Gallipoli campaign in 1915 and survived. In the spring of 1916 he was shipped back to the western front and was based in the town of Amiens in northern France. On July 1st 1916 he was part of the 29th Division which attacked the German front line on the first day of the Battle of the Somme. Private Anthony Gallagher and thousands of other troops were killed within a few hours. His body was never recovered and today he is commemorated on the huge Thiepval Memorial to the Missing of the Somme along with over 72,000 others.

Over the past 10 years I have taken a number of student groups to the Somme battlefield region. I began to realise the huge number of Irish born soldiers who died there and in order to make the trips more meaningful for my students I got each of them to “adopt” a soldier from County Donegal who died in the Somme. We then visited their graves and one of the most poignant aspects of the experience was the fact that on many occasions we were the very first people from Ireland to visit the graves.

Over the past 2 years I began to plan a trip to the Somme but this time involving students from every county on the island of Ireland. 32 students will “adopt” a soldier from his/her native county who died in the First World War. Each student has been given the name of a soldier from his/her county and has been asked to conduct some basic research. During the visit each student will visit either the grave or monument in the Somme region to honour the memory of his/her soldier. The high-point of the trip will be a special wreath-laying ceremony at the “Thiepval Memorial to the Missing of the Somme”. Four students have also been chosen to represent the soldiers from each of the four Provinces of Ireland who have no known grave.

Students from St Columba’s Comprehensive School in Glenties as well as a student from Monaghan and one from Laois have begun work creating a database of all the soldiers from the island of Ireland who are commemorated on the huge Thiepval Memorial to the Missing of the Somme. The students are working their way through the names of over 73,000 soldiers and are carefully extracting the names of all the soldiers born in Ireland. They plan to put all this information onto a website which will be of great benefit to people doing research in the future.

This trip would not be possible without the help and support of a whole range of people and organisations: